Mental health is on the agenda in the UK more than ever. The latest statistics report that 1 in 4 adults experiences a mental health condition in any given year, and these conditions are the largest single cause of disability in the UK.

With mental health becoming such a widespread issue, brands and organisations are collectively rising to the challenge of raising awareness and reducing stigma. A £9.3 million Government-funded scheme to improve mental health support for young people, and a newly launched campaign from the Head’s Together charity, are just a handful of recent examples that demonstrate the importance of this narrative in today’s society.

This heightened awareness is throwing the spotlight on the media sector, where the negative impact on mental health is particularly visible. As screen-use continues to rise, media brands are increasingly under pressure to protect consumers, and to take accountability for the content they put out there.

As part of our ongoing Illume Guide featured blog posts, we interviewed Kimberley, a passionate mental health activist, to help us understand the challenges in society today and how the media sector in particular is evolving to overcome these issues in a positive way.

Hi Kimberley! Tell us about yourself and your role

I am a mental health activist and social entrepreneur hailing from the hills of South Yorkshire. Being an ‘activist’ encapsulates a lot of my freelance work; project management of health and wellbeing campaigns, writing, consulting and public speaking!

I am the founder of Keep Real, which is a social enterprise supporting better mental health in the community. We do this through live music shows, workshops and our online store. All the profits from our brand, funds our mission to reduce mental health stigma, and create our fresh approach to accessible mental health interventions. Our last live show attracted over 250 people in Leeds!

What inspired you to start Keep Real, and where do you see it going in the future?

The idea of Keep Real formed while I was doing my degree in Counselling Therapy, and struggling with my own mental health. The lack of interventions available to young people (and adults alike!) in terms of accessible support, frustrated me. It felt so clinical, and out of reach, not to mention the waiting list being months long. I wanted to utilise my degree and own experiences to support more people faster…and here we are two years later!

We have plans to grow in the future, spreading our message through our brand, workshops, live music events and support for therapists in the North.

What are some of your favourite projects you’ve worked on through Keep Real?

We teamed up with Leeds-based animator and illustrator Molly Pukes, on a huge project to create our first mental health magazine, where we collaborated with nine other artists throughout its pages. The magazine has been used in schools to talk about mental health.

Another interesting project is this years’ live music show. We had a group of students with us from The University of Leeds Business School who selected Keep Real for their social enterprise module. They had the opportunity to collaborate on our ‘Heading Out’ event we did for Mental Health Awareness Week this year. We raised funds for Leeds Mind too.

Thinking about the mental health landscape today, what do you think are the main challenges facing people in terms of their mental health?

We’re living in a world where we are collectively trying to balance a multitude of aspects in our reality and in trying to understand what the digital world holds for us, this is having implications for our mental health.

For example, we are finding it increasingly difficult to productively navigate our online spaces, while being wary of ‘digital giants’ utilising our data behind the guise of a privacy policy. This is creating a feeling that we no longer have the freedom to use our online spaces how we wish.

Another issue is around the fact that we have higher streams of accessible information than ever before, meaning that lines can blur between over-sharing and being a separate entity to the online world.

Politically, we are seeing a clashing climate here in the UK. Socio-economic factors now define our sense of belonging. Universal Credit is failing our people who need it most, and our position within the ‘Brexit’ turmoil, now defines where we stand…even in our own households.

In your opinion, what are the most important issues in media today surrounding mental health?

I think the most important issue in the media today is accountability of mental health problems. The rapid growth of technology has unfortunately aligned with unchartered mental health effects as we see an increase in human beings being utilised as a commodity in the media.

For example, we have always been accustomed to glamourised role models, but this has developed over time to intrude various forms of media and it now verges on unhealthy forms of consumption available 24/7. Another example is how the privacy of the ‘celebrity’ is being challenged – not only are we seeing celebrities’ mental health fall (Justin Bieber, Kit Harrington, Avicci…) but also the general public who are consuming their worlds, and the lives of others.

Human beings are innately responsive to validation from others – after all, 50,000 years ago, it supported us in forming tribes and surviving! However, from a social media perspective, the dopamine spike in views, likes and comments needs to be reframed and reworked in order for us to explore our online worlds safely.

Ultimately, we need to ensure the technological powers take more responsibility for the shift in media and its contribution to the world’s mental health problems.

There have been a few specific stories lately that have brought about debate around mental health, and put a spotlight on particular issues / platforms. What’s your take on…

A good example is Love Island and how it portrays body image, relationships, and impacts contestant’s mental health. The word ‘reality’ already misinforms the viewer and this definitely needs to change. The portrayal of body image and relationships is skewed, however it depends on the consumer of the show to fully understand its hyper feminine and masculine aesthetic, so I believe we need more discussion around this before and after the show.

“13 Reasons Why” removing suicide scene after it was accused of glamorising suicide.

I think there is a fine balance between raising awareness of suicide, and desensitising a private act to the world. They were correct in removing the scene, especially in regards to the demographic it is aimed towards, and the overall ‘bingeing’ behaviour of shows such as this.

It’s great to see Instagram take accountability, but it doesn’t come without its backlash from influencers, where I think their mental health will suffer from this. I think it’s beneficial to create communities, rather than fans on social media. However it poses the question (in varying forms) – with the dopamine hit being lost, where does it go?

Do you have any examples of anyone leading the change in this area?

Queer Eye has amassed massive popularity linked to its role in driving mental health awareness and support. It has been particularly amazing from a LGBTQ+ perspective and seeing people open up and speak out has really empowered the public.

There has been an increasing rise in the media supporting the awareness of mental health, take CALM’s recent campaign aimed at men ‘grow a pair’ and aims to reduce social isolation in communities. Take the ‘Looking out for our neighbours’ campaign in West Yorkshire, who teamed up with The Great Get Together.

What is the role of music in our mental health?

Music has a huge impact on our wellbeing. It’s a sensory part of our everyday lives, and gives us the ability to express ourselves without verbal communication. It’s so vital.

Apart from Keep Real’s role within this area of utilising music in bringing people together in regards to mental health, there’s some incredible projects going on! Music 4 Mental Health run by ‘Whole’ who host fundraising events with some of the largest acts in pop music (the next event is at the Roundhouse in London with Ed Sheeran, Anne-Marie etc).

We’re also seeing musicians speak out more on mental health through their work (for example, look at how successful A Star Is Born highlighted addiction and mental health issues).

How about the world of gaming? Some people are concerned young people are becoming more anti-social due to immersive media like gaming, but what’s your view?

Gaming is a great experiential and social part of young people’s lives. From its ability to connect with people who share similar interests, it can also be a place of healing for those who find it difficult to express their thoughts and feeling verbally.

Although there is controversy around gaming and mental health, I think in the future we will be able to better understand and equip young people in making decisions regarding immersive media.

For now, I think it is important to have a good dose of face-to-face interaction and immersive technology.

Finally, where do you think things are heading in terms of the role of media in our mental health? What would an ideal future look like? What role should brands play?

I think we are seeing more accountability on various platforms of how the media interlinks with our mental health. It is a refreshing step in the right direction, which I can only see getting better!

As brands have a high profile across our social media interactions, I think we need to see more human interactions with consumers from top level employees so they can see the real face of the brand. This will empower everyone, enabling consumers to make informed choices and create a sense of community and belonging within the fast paced world of brands. 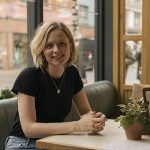