Today, China has many close cultural links with other parts of the world, especially within Asia and with the overseas Chinese community. Chinese culture has spread across the globe due to its ancient customs, as well as its rise as a global power – China is not just the predominant culture in Asia, but it is fast-becoming one of the most prominent cultural forces in the world.

As part of our ongoing Illume Guide featured blog posts, we interviewed our Chinese Guide – Joy, to help us understand more about contemporary Chinese culture and how it is influencing food trends in China.

Hi Joy! Tell us a bit about yourself and your passions.

Hi, I’m Joy from Anhui, China. I’m currently working as a Corporate Communications Specialist in Shanghai, but before this, I worked as a research translator delivering insights on Chinese culture to companies like Disney China. When I’m not working, I love music, travel and learning more about Chinese culture – I’ve recently gotten into a feminist podcast called ‘NüVoices’ which showcases and supports the creative work of women on the subject of China.

How do you see contemporary Chinese culture?

From my perspective, contemporary Chinese culture is largely shaped by the internet. The internet is changing our lifestyle and how we access cultural resources, for example we do a lot of online shopping, instead of visiting physical stores, we watch live streaming instead of TV and most importantly, we communicate through email and apps instead of the traditional way. Our language is even changing as more people pick up new terms and slang words online!

The development of modern culture is happening very quickly in China. There are so many ideas emerging all of the time, but people don’t have the time to take a moment to appreciate these ideas and think about them on a deeper level – this means our modern culture is sometimes shallow and commercial.

What are the main changes in terms of Chinese culture during the last 10 years?

One thing I noticed is that a lot of ‘underground culture’ is becoming popular or more mainstream nowadays as society starts to embrace more ideas and bold thinking. For example, video gaming culture was not popular at all 10 years ago, but now more and more people start to play it and appreciate the technology around it. It has become an important industry and one that is widely accepted by the general public. I believe that there is a link between this phenomenon and the popularisation of youth culture.

Apart from that, mobile technology and e-commerce are growing very fast in China. You can now do everything with a smart phone, from shopping, watching TV, dating, consulting with a doctor to finding a job.

What do you think are the most important things for you as a millennial in China?

I believe family and having a good career are the most important things for most Chinese millennials in general. Apart from that, I think young millennials would like to receive more care and support, whether it’s from family, friends or the society. Although the economy is developing really fast and our living standards are improving more than ever, there is an ‘unhappy culture’ among young millennials, who feel the impact of this pressure. Many millennials, especially those who have left home to work in the big cities, feel stuck in certain situation. For example, more and more young millennials left family and come to work in Tier 1 or Tier 2 cities, they are struggling in the situation where they need to work harder to compete with those from the cities, without support from the family and society. As in China, people enjoy different welfare in different region, for a non-shanghainess citizens, they can’t enjoy most welfare that shanghai people can have even he lives and works in the city. They work hard but still feel like an ‘outsider’.

If talking to a friend oversees, I would describe Chinese food as ‘more than just kong pao chicken’. Chinese food is very diverse and cuisine types vary from region to region – we have 8 different cuisines in China. (https://www.chinahighlights.com/travelguide/chinese-food/eight-cuisine.htm)

What I really like about Chinese food is the huge amount of ingredients that people can choose from. Chinese people are very good at trying different ingredients and new flavours. When I travel abroad, I see many people unwilling to try new food which they are unsure about, but this isn’t the case in China.

Another element of our food culture is how much food we waste. As a culture, we like to show hospitality and in combination with affordable food, this means that we tend to over-order so that we can share a lot of dishes. There is often a lot of food waste, which is a very bad habit. In 2013, a campaign to eliminate food called Operation Empty Plate waste swept across China. It became popular after receiving support from the national government, and quickly brought attention to the huge amount of food that was being left on consumer’s plates. At the time, hundreds of Chinese establishments joined the movement by offering smaller plates and abolishing minimum fees. In a nation where ordering a lot of food is a symbol of status, this was a massive step towards a more sustainable system.

Have you noticed any changes in Chinese food culture recently?

There has been a prominent shift in Chinese food culture in the last decade or so, and this is largely driven by global influences, the role of tech and online, as well as how quickly new ideas are spreading.

The first change is how people in China are consuming food that is cooked out of the home. In Shanghai, more people have started to eat out during the last decade, and there are more international food options to enjoy – young people love to have Japanese sushi, Korean barbeque, or Italian pizza.

Take away food is also huge in China, especially among young professionals in cities, who are too busy with work and don’t have much time to cook. For people who can’t find the time to go to a restaurant, there are take away apps like ‘Ele.me’ which are very convenient. People can order food on an app, restaurants then put the food in plastic containers for one-off use. As a result of this however, more people are beginning to realise that plastic overuse is a big issue, both to the environment and to personal health. In response to this, some restaurants start to give discounts to consumers who would return the tableware or recycle the tableware.

Technology is also having a huge influence on food culture in China. Review sites are popular in China in general, and this is spreading to how people make decisions about food –  most people now check reviews before they going out to eat, or even while they are at the table before they are about to order. The most popular one is ‘Dazhong dianping’, where people leave detailed reviews and earn money back from the site.

Another shift is the rise of health consciousness. Young women in particular are more focused on consuming nutritious food to take care of the body. For example, they would eat salad to keep fit and buy food with more vitamins to stay beautiful, for example coconut water and low calorie food options are becoming more popular. In 2017, Alibaba launched a store called ‘freshhema’ that is famous for fresh and quality food. It has become very popular in China and people also see it as a cool thing to shop there. It says something about your identity if you shop there. One thing that hasn’t caught on yet is vegetarianism, due to the types of food we consume.

What about any new and exciting food products that are popular at the moment?

Customised products are popular at the moment. Coco cola is doing well with their personalised packaging as it gives consumers something to make them feel good, e.g. special claims or people can choose different drinks according to their mood.

Another way that brands are specifically targeting people is through halal products as we have quite a lot of Islamic ethnic groups in China.

Another massive trend in China is Bubble tea. There is a very famous brand called: ‘The ally’. Bubble tea has been traditionally seen as a very unhealthy drink, but this brand is famous for its higher quality bubble and milk, which tastes good.  Another new food trend on the back of this is the bubble cake which is very popular among women. If you cut the cake, bubbles comes out. Another interesting phenomenon in modern Chinese culture is what we call ‘wanghong’ which means internet celebrity or online sensation. How this applies to food is that a particular type of food or drink, or brand can become so popular that people will queue for a long time to try it. Brands like to try mixing different things to create new combinations, so that they can ultimately become ‘wanghong’.

If a shop been classified as ‘wanghong’, it’s common to see a long queue outside the store as people would be willing to spend a number of hours to queue to buy that product – there is a limit on how many you buy, so you have to show your ID card. Some people even pay others to wait in the queue for them!  It’s time consuming, but I’m still willing to try it. 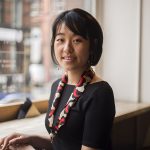