Escape to 'Other Worlds'

In a world mediated by screens, we’re always straddling the online and offline world, not fully engaging with either. This is giving rise to consumers looking to escape into immersive environments which engage their full attention. In 2016 we acknowledged this need by introducing ‘Total Immersion’ into our set of Happiness Trends, recognising consumers would continue to look for fully immersive experiences in order to counter the lack of Focus in everyday life – providing escapism, adventure, and memorable experiences.

As 2016 progressed, we saw the need for escapism heighten as the political and economic climate became even more uncertain due to Brexit, the election of Donald Trump, multiple celebrity deaths, and news on terrorism from across the globe. As a result, we’re now seeing consumers not only looking to throw themselves into immersive experiences, but to escape into ‘other worlds’ altogether as either a backlash or retreat away from a difficult reality.

One way consumers are escaping is through Sci-Fi and Dystopian narratives.

The definition of dystopia is ‘an imagined place or state in which everything is unpleasant or bad, typically a totalitarian or degraded one.’

Sales of dystopian titles such as 1984, Fahrenheit 451 and Brave New World have boomed in recent years, but most notably post-Trump’s inauguration. People are looking to dystopian texts to explore and emphasise their own anxieties about the present day. For example, Sinclair Lewis’ It Can’t Happen Here made its way to 8th in the Amazon best sellers list. The rise in sales of the novel reflect anxieties surrounding Trump, with the novel depicting an eerily similar tale of a Democratic U.S. Senator rising to presidency with the promise of restoring American ‘greatness’, but eventually dragging the country into fascism

For consumers, this is an outlet to explore fears and concerns to their extremes, making reality seem better in comparison. Additionally, these texts commonly feature a protagonist who challenges the state they’re living in – giving consumers hope that we still have the power to improve the world no matter how dire the circumstances.

The incredible success of Netflix’s Stranger Things and Black Mirror are further examples of consumers fascinated by dark, fearful worlds. In contrast to dystopian narratives, we’re seeing consumers detaching themselves from reality to escape into fantasy worlds and spirituality.

In film, for example, the top 20 US films in 2016 were almost all set in fantasy locations. Star Wars, Captain America, Deadpool and Batman V Superman are all examples. As a generalisation, these texts create their own problems and rely on superheroes or vigilantes to ‘save the day.’ In troubled times, we demand heroes. The rise in superhero and fantasy films show consumers are looking to escape their own reality into another world, where issues are resolved and order is restored.

‘Spirituality’ is also on the rise, played out via a ‘third-wave of New Age’, which sees consumers seeking spirituality through crystals, astrology, sound baths, tarot and cosmology. In a ‘post-truth’ world where there’s an abundance of information, and almost everything is critiqued and explained, many early adopters are reaching out to the knowingly unexplainable in search of hope and ‘something to believe in’. In contrast to previous years, these practises are now deemed millennial friendly, ‘cool’, and in-line with the mindfulness trend.

WGSN have dubbed this the ‘witch renaissance’, where these once niche interests are becoming more easily accessible through platforms such as Instagram ‘#witchesofinstagram’, Pinterest, as well as monthly subscription boxes containing all the ingredients to unleash the inner witch.

Brands can utilise this trend by creating these ‘other worlds’ for consumers to escape into, tapping into the inherent need for hope, or mirroring the colours, themes and visuals perpetuated in these areas. The fashion industry for example, which leads the way in consumer trends, is tapping into Sci-Fi and dystopia through futuristic, metallic and dark aesthetics.  We’re seeing this plastered across the catwalk, designer stores, and on the high street. Examples include Nicolas Ghesquiere’s ‘Sci-Fi Heroines’ collection for Louis Vuitton, M.A.C’s ‘Star Trek’ make-up line, and Stylist’s Autumn 2016 catwalk trend ‘Intergalactic’, which features pieces from Zara, H&M and ASOS.  Vogue also published ‘summer is the season of the witch’, promoting gothic styles and flowing dresses to signify witchery and spirituality.

Whether it be making reality seem less negative in contrast to dystopian narratives, seeking out guidance fromthe unknown, or detaching ourselves from reality all together, we predict the political uncertainty and instability in 2017 will increase consumer demand even further to escape into ‘other worlds’, which is why this will form the basis of a new Happiness Trend for 2017.

Read about our 2016 Happiness Trends here

If you’d like to know more, get in touch with the team. 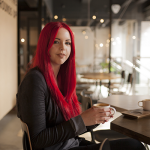